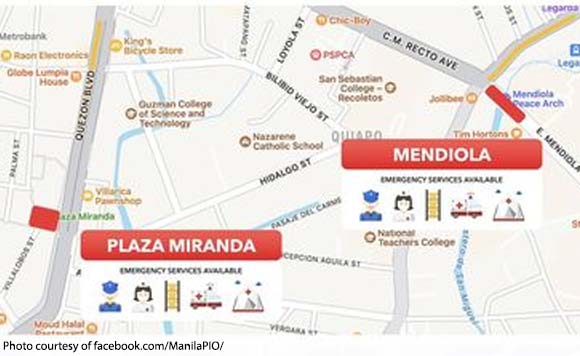 0 676
Share
Want more POLITIKO News? Get the latest newsfeed here. We publish dozens and dozens of politics-only news stories every hour. Click here to get to know more about your politiko - from trivial to crucial. it's our commitment to tell their stories. We follow your favorite POLITIKO like they are rockstars. If you are the politiko, always remember, your side is always our story. Read more. Find out more. Get the latest news here before it spreads on social media. Follow and bookmark this link. https://goo.gl/SvY8Kr

The Manila Police District will be keeping a close watch on Mendiola and Plaza Miranda today for the anniversary of the martial law declaration.

In compliance with the directive of Manila Mayor Honey Lacuna, it will deploy its Civil Disturbance Management personnel to the area and also send firetrucks and emergency units.

This is to maintain peace and order in anticipation of activities connected to the commemoration of the 50th anniversary of the declaration of martial area, according to the Manila Public Information Office.

It also called on the public to expect heavy traffic in the affected areas and to avoid these if possible.

“The public is advised to avoid mentioned areas as heavy traffic is anticipated brought about by these said activities,” it said.

This is the first time that the country will mark the anniversary of the martial law declaration with the late dictator’s son and namesake Ferdinand “Bongbong” Marcos Jr. serving as the country’s president.

The martial law period in the country was marked by abuses and kept the late dictator in power for years before he was unseated in a bloodless revolution.