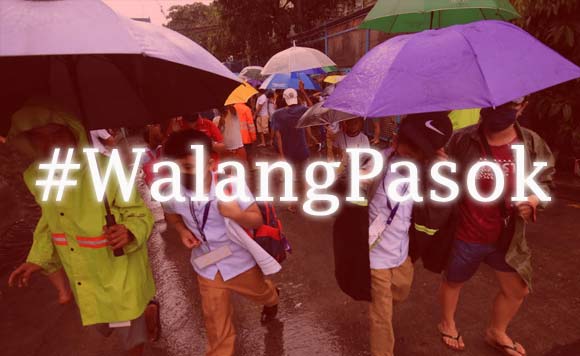 0 805
Share
Want more POLITIKO News? Get the latest newsfeed here. We publish dozens and dozens of politics-only news stories every hour. Click here to get to know more about your politiko - from trivial to crucial. it's our commitment to tell their stories. We follow your favorite POLITIKO like they are rockstars. If you are the politiko, always remember, your side is always our story. Read more. Find out more. Get the latest news here before it spreads on social media. Follow and bookmark this link. https://goo.gl/SvY8Kr

The local governments of Caloocan, Malabon, Navotas, Valenzuela, Marikina, and Parañaque suspended classes in their respective jurisdictions today due to heavy rains.

Caloocan Mayor Along Malapitan said classes in all levels in public and private schools are suspended.

In case classes are already ongoing, Malapitan said the schools should ensure that the students would be able to go home safely.

They should also give parents enough time to fetch their kids from school amid the bad weather, he said.

Malabon Mayor Jeannie Sandoval also announced on Facebook that classes in all levels for both public and private school are suspended as of 9:30 a.m.

In Navotas, classes from pre-school to college in both public and private schools are suspended from 12 noon onwards due to the expected heavy rains, said Mayor John Rey Tiangco.

Valenzuela Mayor Wes Gatchalian announced the suspension of classes from pre-school to college, in public and private schools, beginning 12 noon today due to “the unpredictable weather situation that Habagat rains may bring.”

Work suspension in private companies will be at the discretion of their management.

The Marikina City government said afternoon classes in all levels in public and private schools are suspended today because the weather bureau predicts heavy to intense rains this afternoon.

“This preemptive measure is intended for the safety of our students,” it said.

Parañaque Mayor Eric Olivarez also suspended classes in all levels in public and private schools starting at 12 noon due to the bad weather.