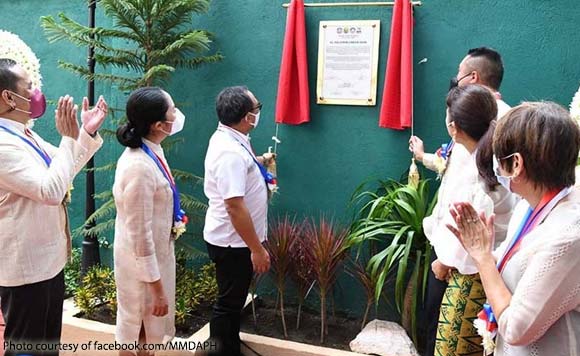 0 1,201
Share
Want more POLITIKO News? Get the latest newsfeed here. We publish dozens and dozens of politics-only news stories every hour. Click here to get to know more about your politiko - from trivial to crucial. it's our commitment to tell their stories. We follow your favorite POLITIKO like they are rockstars. If you are the politiko, always remember, your side is always our story. Read more. Find out more. Get the latest news here before it spreads on social media. Follow and bookmark this link. https://goo.gl/SvY8Kr

The Metropolitan Manila Development Authority on Tuesday inaugurated the newly rehabilitated El Polvorin Linear Park and turned it over to the San Juan City local government.

The MMDA developed the facility, located at the San Juan Elementary School, as part of its Adopt-a-Park Project.

The El Polvorin Linear Park was built to honor the martyrs of the Himagsikan sa San Juan del Monte who valiantly fought with their bolos and machetes against the better armed Spaniards on August 30, 1896.

Their uprising helped ignite the Philippine revolution that led to the country’s independence.

“We hope to develop or rehabilitate existing open spaces into functional green parks and recreation areas in partnership with each LGU of Metro Manila to further strengthen initiatives on urban renewal,” Dimayuga said.

San Juan Mayor Francis Zamora, who was also present at the inauguration, thanked the MMDA for the project.

“I thank MMDA for funding the linear park. I want San Juan to be known for its historical significance,” Zamora said.

Under the MMDA’s Adopt-A-Park project, local governments would identify the location and propose the design and cost estimate of the project, while the MMDA would set the criteria for site selection, provide the funding, and implement the construction.

Officials held flag-raising and wreath-laying ceremonies at the venue.