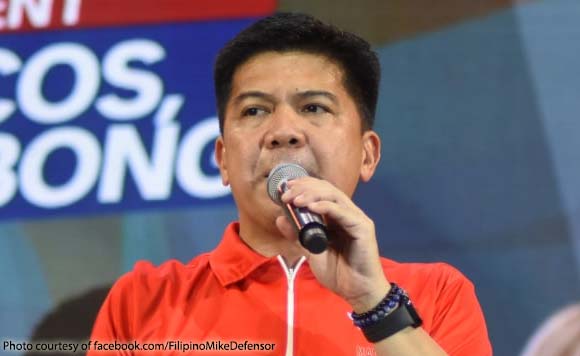 0 910
Share
Want more POLITIKO News? Get the latest newsfeed here. We publish dozens and dozens of politics-only news stories every hour. Click here to get to know more about your politiko - from trivial to crucial. it's our commitment to tell their stories. We follow your favorite POLITIKO like they are rockstars. If you are the politiko, always remember, your side is always our story. Read more. Find out more. Get the latest news here before it spreads on social media. Follow and bookmark this link. https://goo.gl/SvY8Kr

Former Anakalusugan Rep. Mike Defensor on Thursday said he had been requested to help the Metropolitan Manila Development Authority in his private capacity, after chief presidential legal counsel Juan Ponce Enrile questioned his presence in a meeting of the government agency.

Defensor’s presence in the meeting, as shown on photos on social media, did not sit well with Enrile, who questioned his role in the MMDA event and wondered if this was proper decorum.

“I suggest we should be very careful in not carelessly showing an arrogance of power in our behavior as public persons, especially if we are somewhat identified with the current regime,” Enrile said.

In a statement released on Facebook, Defensor said he chose to initially keep quiet until he had explained himself to Enrile.

He has since come out to clear the matter.

According to him, he was asked to help out in the MMDA’s preparations for the reopening of schools as a friend of MMDA Chair Carlo Dimayuga and as former chief of staff of the President.

“As a friend of Chairman Engr. Carlo Dimayuga and as a former Chief of Staff of the President, I was asked to help out in the MMDA effort since this will be the first time after two years that we will open our schools. I have always been involved in the Balik Eskwela effort in the past and in particular in the discussions on the traffic preparations,” he said.

He also said the photo posted on social media that showed him talking was when he raised a question about traffic chokepoints around Ateneo de Manila University and De La Salle University.

He said he was not an official or a consultant of the MMDA as this would violate the one-year prohibition on him holding public office, having lost in the May election.

He is not getting paid for helping the MMDA either, he said.

“I am not getting a single centavo in my effort to help the administration. I do not hold office there nor do I order people around. It was one meeting where my assistance was sought to help the government effort to ensure the success of our traffic response and the safety and convenience of our students and their families,” he said.

Defensor said he explained all these to Enrile, while the latter explained to him his role to protect the President.

“We are in agreement,” he said.

He also said he would continue to help the President and his administration in his private capacity when asked to do so.