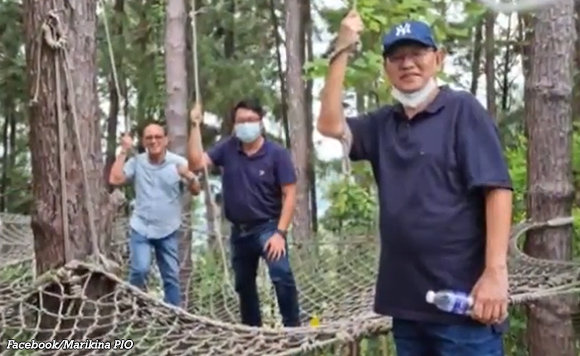 0 877
Share
Want more POLITIKO News? Get the latest newsfeed here. We publish dozens and dozens of politics-only news stories every hour. Click here to get to know more about your politiko - from trivial to crucial. it's our commitment to tell their stories. We follow your favorite POLITIKO like they are rockstars. If you are the politiko, always remember, your side is always our story. Read more. Find out more. Get the latest news here before it spreads on social media. Follow and bookmark this link. https://goo.gl/SvY8Kr

Marikina Mayor Marcy Teodoro paid a visit to Masungi Georeserve in Baras, Rizal to check out the Upper Marikina Watershed.

But Teodoro did not quite see what he expected.

Teodoro found young trees and grass in the area, when he was expecting a lush forest.

He said the lack of mature trees was why Marikina experiences flooding.

Since Marikina City is in the lower part of the watershed, it bears the brunt of the effects of deforestation, according to the Marikina public information office.

It said the lack of enough trees causes water from the mountain to flow down quicker, along with sand and silt.

Teodoro said that to remedy this, deforestation must be addressed and long-term plans put in place.

Before leaving Masungi, he and Marikina officials held a tree-planting activity.

He has been calling for or the protection and preservation of trees and natural resources near the Marikina River and the city.