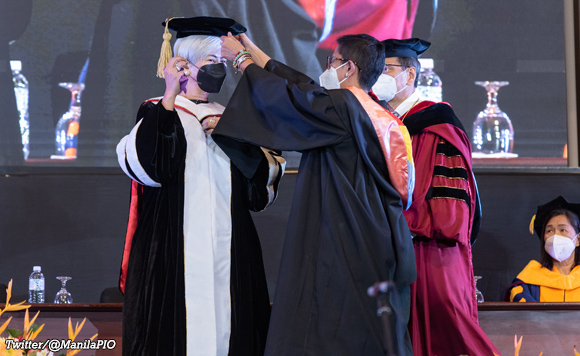 0 130
Share
Want more POLITIKO News? Get the latest newsfeed here. We publish dozens and dozens of politics-only news stories every hour. Click here to get to know more about your politiko - from trivial to crucial. it's our commitment to tell their stories. We follow your favorite POLITIKO like they are rockstars. If you are the politiko, always remember, your side is always our story. Read more. Find out more. Get the latest news here before it spreads on social media. Follow and bookmark this link. https://goo.gl/SvY8Kr

Manila Mayor Honey Lacuna was invited to speak before the Pamantasan ng Lungsod ng Maynila’s (PLM) Class of 2022, but was surprised with her own honorary degree.

Lacuna received a degree of Doctor of Public Administration, honoris causa, from the city-funded university during the graduation ceremony at PICC on Friday, August 5, 2022.

The politiko has only been mayor for a month, but PLM honored her decades of working for Manila’s health and social welfare departments.

IN PHOTOS: Manila Mayor Maria Sheilah “Honey” Lacuna-Pangan was conferred with the degree of Doctor of Public Administration, honoris causa by the Pamantasan ng Lungsod ng Maynila (PLM) during the 54th commencement exercise at PICC on Friday, August 5. pic.twitter.com/k0T4JxSe76