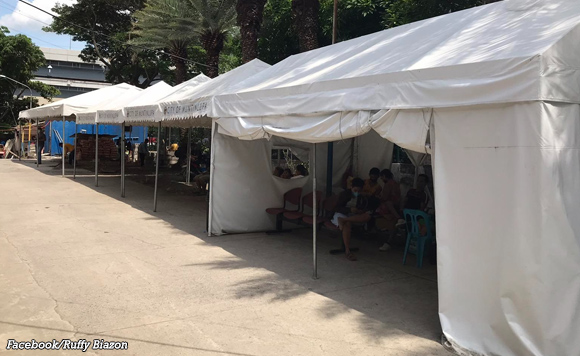 0 1,566
Share
Want more POLITIKO News? Get the latest newsfeed here. We publish dozens and dozens of politics-only news stories every hour. Click here to get to know more about your politiko - from trivial to crucial. it's our commitment to tell their stories. We follow your favorite POLITIKO like they are rockstars. If you are the politiko, always remember, your side is always our story. Read more. Find out more. Get the latest news here before it spreads on social media. Follow and bookmark this link. https://goo.gl/SvY8Kr

The improvement of the Ospital ng Muntinlupa’s surroundings is well on its way.

The city government has completed the clearing operations in front of the hospital and has put up tents to serve as temporary waiting areas, according to Mayor Ruffy Biazon.

Biazon said a total of five tents had been set up, and they would be outfitted with electric fans and chairs.

These would serve as temporary waiting areas while COVID-19 protocols prohibit patients from having watchers, he said.

He also said the four restrooms in the waiting area are under construction, while the windows and aircon cases are being put in place.

He also said all these activities are just the first phase of his project.

“We hope to do more in terms of upgrading the facilities and equipment,” he said.