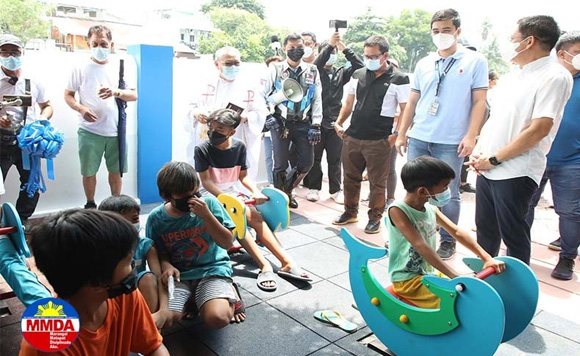 0 487
Share
Want more POLITIKO News? Get the latest newsfeed here. We publish dozens and dozens of politics-only news stories every hour. Click here to get to know more about your politiko - from trivial to crucial. it's our commitment to tell their stories. We follow your favorite POLITIKO like they are rockstars. If you are the politiko, always remember, your side is always our story. Read more. Find out more. Get the latest news here before it spreads on social media. Follow and bookmark this link. https://goo.gl/SvY8Kr

Residents of Pasig have a new park where they can hang out and play.

The Metropolitan Manila Development Authority inaugurated and turned over to the Pasig City government the Buting Linear Park in Barangay San Joaquin today.

The 800-meter area was developed as part of the MMDA’s Adopt-A-Park project.

The new park has a river wall, green and play areas, and an exercise equipment zone.

MMDA officer in charge Baltazar Melgar said the agency would look for more areas that could be rehabilitated as parks.

“We will help the LGUs in identifying more places such as easements to be converted as open parks,” Melgar said.

He also called on barangays to ensure that the areas would be clean.

Pasig Mayor Vico Sotto praised the project and said it was important to have green spaces and playgrounds for the people of the city.

“These open spaces are good for both the physical and mental health of Pasigueños living around the area,” Sotto said.

Having a park would also keep children safe as they would be in an area that could be monitored and supervised, he said.

Pasig Rep. Roman Romulo promised to ensure that the new park would be well-maintained.

The Buting Linear Park is one of 24 parks in Metro Manila that the MMDA is constructing or rehabilitating.

Under its Adopt-A-Park project, the local governments would provide the location, design, and cost estimate for the new park, while the MMDA would set the criteria for site selection, provide the funding, and handle the construction.

The project aims to curb urban decay and reduce urban heat effects as well as provide safe and clean areas for family events and wellness activities.