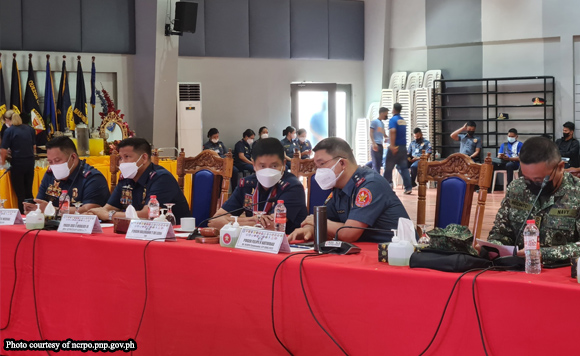 0 1,799
Share
Want more POLITIKO News? Get the latest newsfeed here. We publish dozens and dozens of politics-only news stories every hour. Click here to get to know more about your politiko - from trivial to crucial. it's our commitment to tell their stories. We follow your favorite POLITIKO like they are rockstars. If you are the politiko, always remember, your side is always our story. Read more. Find out more. Get the latest news here before it spreads on social media. Follow and bookmark this link. https://goo.gl/SvY8Kr

Police officials held their final coordinating conference to lay down plans to secure the first state of the nation address of President Ferdinand “Bongbong” Marcos Jr., and promised maximum tolerance for protesters.

Joining him was National Capital Region Police Office chief Maj. Gen. Felipe Natividad, who said the police would not prohibit the holding of protests and mass gatherings in the exercise of the people’s right to air their grievances to the government.

He disputed criticism that the planned deployment of more than 22,000 police and allied forces for the SONA was overkill.

He said there was no overkill when it comes to security and public safety, and that it was the PNP’s duty to secure the public and the highest official of the land.

Despite the deployment of a thousands of personnel for the SONA, he said the usual functions of police units, stations, and precincts would not be affected.

The PNP has activated sub task-groups to address incidents that might crop up during the address.

It has also suspended permits to carry firearms outside of residence in Metro Manila.

Meanwhile, the NCRPO advised motorists that heavy traffic is expected on Monday on the roads near Batasang Pambansa and asked them to prepare for this.

“The public is therefore advised to be aware of the suggested alternate routes that the MMDA has been releasing,” it said.