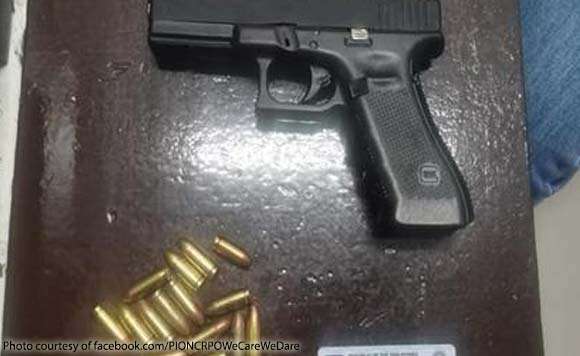 0 1,409
Share
Want more POLITIKO News? Get the latest newsfeed here. We publish dozens and dozens of politics-only news stories every hour. Click here to get to know more about your politiko - from trivial to crucial. it's our commitment to tell their stories. We follow your favorite POLITIKO like they are rockstars. If you are the politiko, always remember, your side is always our story. Read more. Find out more. Get the latest news here before it spreads on social media. Follow and bookmark this link. https://goo.gl/SvY8Kr

National Capital Region Police Office chief Maj. Gen. Felipe Natividad is proud of his personnel who refused a P500,00 bribe offer from a man caught with an unlicensed firearm.

The personnel who said no to the offer were Senior Master Sergeant Reynaldo Cordova and Pat Remeil Yumul of the Tactical Motorcycle Rider Unit of the Manila Police District.

The NCRPO identified the man who offered the payoff as Mark Rover de Ocampo, who was arrested on July 13 for entering a one way street in Malate, Manila.

Police also found a firearm in plain view when they confronted him, and he failed to produce its supporting documents.

The NCRPO said the police brought De Ocampo to the Malate Police Station for initial documentation, and he tried to offer a P500,000 bribe in exchange for the dropping of the complaint against him.

The police personnel rejected the offer.

These policemen should serve as good examples to their colleagues, he said.

The NCRPO said De Ocampo is facing charges for reckless driving, illegal possession of firearm and ammunition, and corruption of public officials.