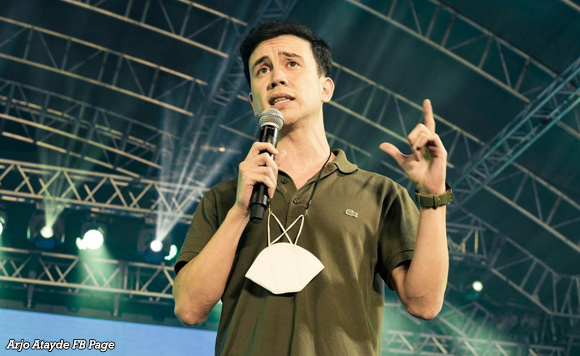 0 1,279
Share
Want more POLITIKO News? Get the latest newsfeed here. We publish dozens and dozens of politics-only news stories every hour. Click here to get to know more about your politiko - from trivial to crucial. it's our commitment to tell their stories. We follow your favorite POLITIKO like they are rockstars. If you are the politiko, always remember, your side is always our story. Read more. Find out more. Get the latest news here before it spreads on social media. Follow and bookmark this link. https://goo.gl/SvY8Kr

Quezon City Rep. Arjo Atayde has filed a measure seeking to declare Quezon City as the “Film and Television Arts Capital of the Philippines.”

In House Bill 457, Atayde said Quezon City has been unofficially considered the “Hollywood of the Philippines,” as most film and television production companies have established their headquarters and studios in the city.

ABS-CBN, GMA, NET 25, UNTV, and PTV are all based in the city, along with film studios such as Star Cinema, GMA Films, OctoArts Films, FPJ Productions, and TBA Studios.

The University of the Philippines Film Institute (UPFI) which is based in Diliman is widely recognized as a premier film school in the country and abroad.

The Movie and Television Review and Classification Board (MTRCB) also has an office in the city.

“It is this clear that Quezon City has served and continues to serve as the main hub for film and television arts and expression in our country,” said Atayde who is also an actor.

Under the measure, the city’s designation as “Film and Television Arts Capital of the Philippines” would be included in programs of the Department of Tourism (DOT).

“We must endeavor to promote Quezon City not only as a tourist destination for film and television viewers here and from around the world, but as a source of inspiration for future filmmakers and television producers who will carry on the proud legacy of our industry for generations to come,” Atayde added.