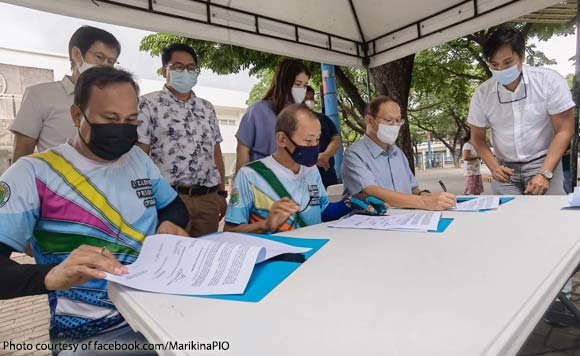 0 486
Share
Want more POLITIKO News? Get the latest newsfeed here. We publish dozens and dozens of politics-only news stories every hour. Click here to get to know more about your politiko - from trivial to crucial. it's our commitment to tell their stories. We follow your favorite POLITIKO like they are rockstars. If you are the politiko, always remember, your side is always our story. Read more. Find out more. Get the latest news here before it spreads on social media. Follow and bookmark this link. https://goo.gl/SvY8Kr

Tricycle drivers in Marikina will be helping to maintain peace and order and improve emergency response in the city.

Marikina Mayor Marcy Teodoro has signed a memorandum of agreement with tricycle operators and drivers’ associations in the city for direct communication on matters on the ground.

Under the deal, the groups would receive two-way radios that are directly connected to the Marikina Central Communication and Command Center, or Rescue 161.

They would have their own frequency so that they could report directly to the local government about the situation on the ground, their own concerns, and the problems faced by their group, according to the Marikina public information office.

This would also allow them to inform the city about incidents that need emergency response, or other matters that other local government departments should address, it said.