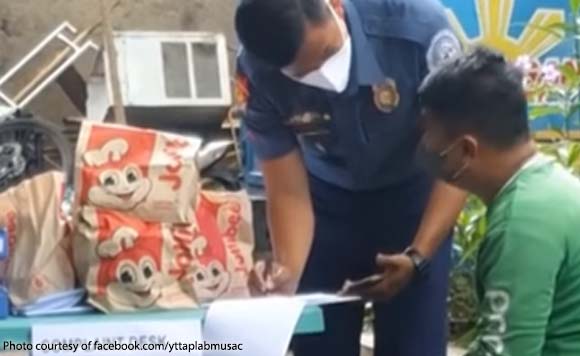 0 526
Share
Want more POLITIKO News? Get the latest newsfeed here. We publish dozens and dozens of politics-only news stories every hour. Click here to get to know more about your politiko - from trivial to crucial. it's our commitment to tell their stories. We follow your favorite POLITIKO like they are rockstars. If you are the politiko, always remember, your side is always our story. Read more. Find out more. Get the latest news here before it spreads on social media. Follow and bookmark this link. https://goo.gl/SvY8Kr

Pasig’s cybercrime police personnel recently came to the rescue of a Grab delivery rider who fell prey to a fake booking.

According to the Facebook post of netizen Citnad Patrizia, the Grab delivery rider went to the Pasig police to report the incident.

Patrizia, who was at the police station to bring the wares she was selling, said the Grab driver was in tears as he narrated to the officers that when he brought the Jollibee order to the delivery area, he was told that the address was non-existent.

The driver sought the help of barangay officials and was advised to bring the matter to the police.

The driver said the Jollibee order was the first he received for the day.

A few moments later, a policeman approached the Grab rider and said the police personnel pooled their resources to buy the Jollibee orders from him, she said.

The rider was overjoyed as he needed the money for his baby, she said.

She said she was near tears over the act of the Pasig policemen, who she praised for their generosity.