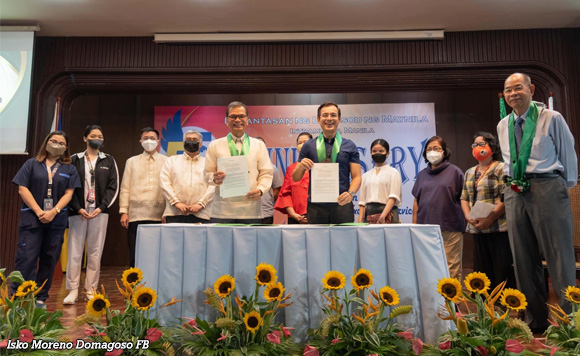 0 732
Share
Want more POLITIKO News? Get the latest newsfeed here. We publish dozens and dozens of politics-only news stories every hour. Click here to get to know more about your politiko - from trivial to crucial. it's our commitment to tell their stories. We follow your favorite POLITIKO like they are rockstars. If you are the politiko, always remember, your side is always our story. Read more. Find out more. Get the latest news here before it spreads on social media. Follow and bookmark this link. https://goo.gl/SvY8Kr

The old building of the Ospital ng Maynila will be put to good use as it will serve as the College of Medicine and Allied Health Services of the Pamantasan ng Lungsod ng Maynila, according to Manila Mayor Isko Moreno Domagoso.

On the PLM’s 55th anniversary, Domagoso signed the deed of donation to turn over the building to the school.

This was in fulfillment of one of his promises, said Domagoso.

The opening of a new PLM facility would allow it to accept more students in different courses as it would free up more space in the main campus, he said.