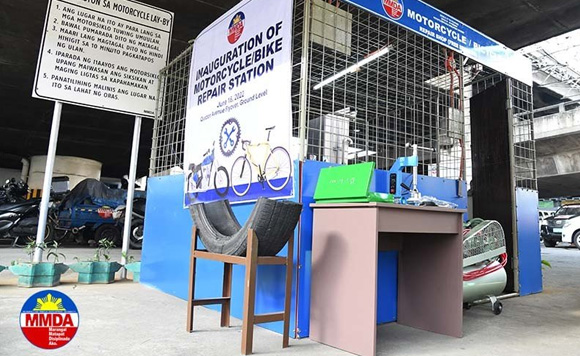 0 793
Share
Want more POLITIKO News? Get the latest newsfeed here. We publish dozens and dozens of politics-only news stories every hour. Click here to get to know more about your politiko - from trivial to crucial. it's our commitment to tell their stories. We follow your favorite POLITIKO like they are rockstars. If you are the politiko, always remember, your side is always our story. Read more. Find out more. Get the latest news here before it spreads on social media. Follow and bookmark this link. https://goo.gl/SvY8Kr

Motorcycle and bicycle riders who encounter trouble along EDSA could get some help courtesy of the newly launched repair station of the Metropolitan Manila Development Authority.

The repair station is located at the ground level of Quezon Avenue flyover along EDSA and is meant to provide emergency road assistance to motorcycle riders and cyclists.

The repair station will be open from 5 am to 9 pm and has basic repair and vulcanizing tools, as well as trained MMDA personnel who will help those whose bikes and motorcycles broke down on the road.

MMDA chair Romando Artes said the establishment of the repair station is meant to address motorists’ and cyclists’ emergencies so that their vehicles need not be towed outright.

“The only time the vehicle will be towed is when it is beyond repair,” Artes said.

He said more repair stations would be put up in strategic locations around Metro Manila.

These would later be expanded to cater to four-wheel vehicles, he said.

He reminded cyclists to adhere to road safety measures and warned motorcycle riders who are entering bike lanes that they would be apprehended via the agency’s No Contact Apprehension Policy.

Congressman-elect Bonifacio Bosita of 1Rider Partylist, who attended the launching of the repair station, hailed the project.

“This will surely make the rider community happy since they now have a place to go to in case they need emergency repairs,” Bosita said.

Artes said the MMDA would pursue its proposal to to have elevated bike lanes and walkways.

The agency has also been looking into the proposal to give motorcycles a dedicated lane along major thoroughfares, he added.