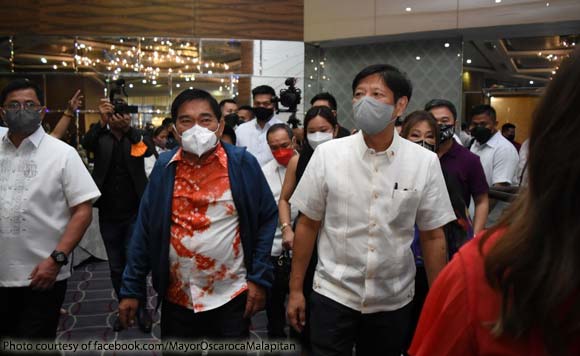 0 317
Share
Want more POLITIKO News? Get the latest newsfeed here. We publish dozens and dozens of politics-only news stories every hour. Click here to get to know more about your politiko - from trivial to crucial. it's our commitment to tell their stories. We follow your favorite POLITIKO like they are rockstars. If you are the politiko, always remember, your side is always our story. Read more. Find out more. Get the latest news here before it spreads on social media. Follow and bookmark this link. https://goo.gl/SvY8Kr

Caloocan Mayor Oscar Malapitan had a VIP guest at his birthday party.

President-elect Ferdinand “Bongbong” Marcos Jr., whom Malapitan supported during the campaign, attended his birthday bash, which also served as victory party of Mayor-elect Along Malapitan.

The mayor thanked Marcos for his presence.

He also expressed gratitude to his other guests and supporters, and to all those who sent their well-wishes for him.

He thanked the people of Caloocan as well.