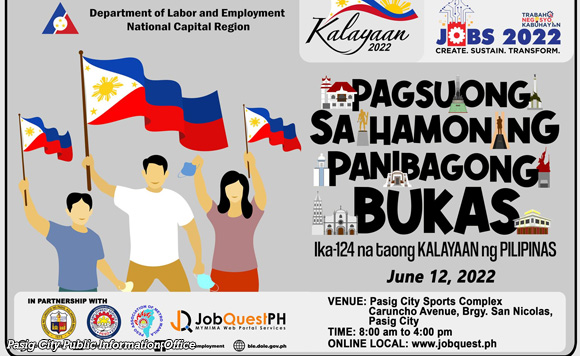 0 947
Share
Want more POLITIKO News? Get the latest newsfeed here. We publish dozens and dozens of politics-only news stories every hour. Click here to get to know more about your politiko - from trivial to crucial. it's our commitment to tell their stories. We follow your favorite POLITIKO like they are rockstars. If you are the politiko, always remember, your side is always our story. Read more. Find out more. Get the latest news here before it spreads on social media. Follow and bookmark this link. https://goo.gl/SvY8Kr

The Pasig City government will host a job fair for its residents on June 12 as part of its celebration of the 124th anniversary of Philippine independence.

The Pasig PIO said 67 companies would join the event and offer 9,503 jobs.

It also said the job fair would serve as a one-stop shop for employment requirements.

Visitors to the fair would be able to process their Social Security System, Bureau of Internal Revenue and Pag-Ibig documents as well as their police clearance.

First-time jobseekers who plan to get a free police clearance would need to bring a barangay certificate and oath of undertaking from the barangay attesting that they are first-time job seekers.

The job fair was made possible through the cooperation of the Department of Labor and Employment and the Pasig City Public Employment Service Office.