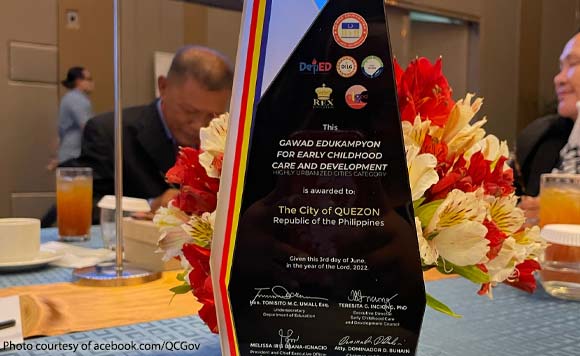 0 2,058
Share
Want more POLITIKO News? Get the latest newsfeed here. We publish dozens and dozens of politics-only news stories every hour. Click here to get to know more about your politiko - from trivial to crucial. it's our commitment to tell their stories. We follow your favorite POLITIKO like they are rockstars. If you are the politiko, always remember, your side is always our story. Read more. Find out more. Get the latest news here before it spreads on social media. Follow and bookmark this link. https://goo.gl/SvY8Kr

The Quezon City government has received commendation for its effective and timely Early Childhood Care and Development programs.

The city government was one of the awardees during the 1st Gawad Edukampyon Awards held Friday.

Quezon City was recognized for its efforts to ensure that children as young as three and four years old continued to be educated amid the pandemic.

The children’s learning continued through online activities, it said.

It also made sure that the children were healthy by conducting regular consultations and check ups, and by providing them with nutritious food through the community feeding program.