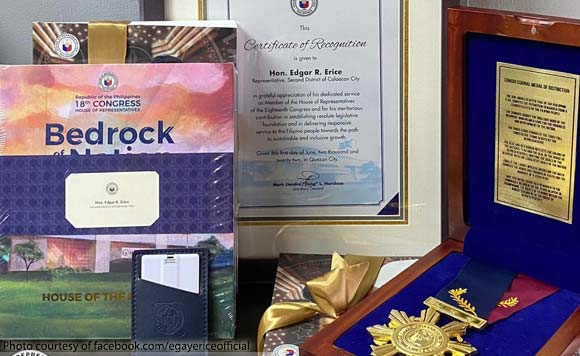 0 83
Share
Want more POLITIKO News? Get the latest newsfeed here. We publish dozens and dozens of politics-only news stories every hour. Click here to get to know more about your politiko - from trivial to crucial. it's our commitment to tell their stories. We follow your favorite POLITIKO like they are rockstars. If you are the politiko, always remember, your side is always our story. Read more. Find out more. Get the latest news here before it spreads on social media. Follow and bookmark this link. https://goo.gl/SvY8Kr

Before he stepped down from the House of Representatives, Caloocan Rep. Egay Erice received recognition for his accomplishments as a lawmaker.

The House awarded Erice, whose term will end on June 30, the Congressional Medal of Distinction.

Erice dedicated the award to the people of Caloocan who gave him the opportunity to serve in various capacities.

The people of Caloocan inspired him to work hard and to pursue his dreams, and it has been his honor to serve them, he said.