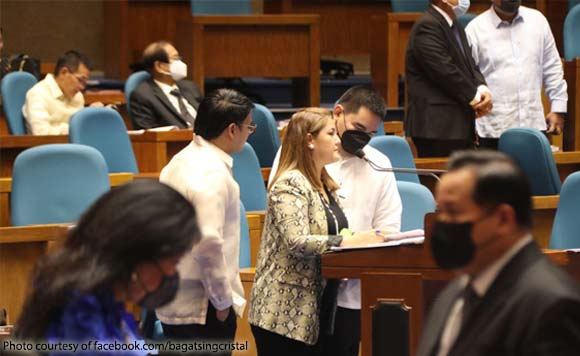 0 231
Share
Want more POLITIKO News? Get the latest newsfeed here. We publish dozens and dozens of politics-only news stories every hour. Click here to get to know more about your politiko - from trivial to crucial. it's our commitment to tell their stories. We follow your favorite POLITIKO like they are rockstars. If you are the politiko, always remember, your side is always our story. Read more. Find out more. Get the latest news here before it spreads on social media. Follow and bookmark this link. https://goo.gl/SvY8Kr

Manila Rep. Cristal Bagatsing felt both sad and happy on her last working day as a lawmaker.

Bagatsing, who also served as Deputy Majority Leader, said she faced a lot of challenges during her term as she was one of those who led deliberations on measures to address the COVID-19 pandemic.

Because of this, she had mixed feelings on the last working day of the 18th Congress.

She was happy because she had been productive during her two terms, but she was sad because she would no longer be able to continue the programs she started in 2016.

She thanked the House of Representatives leadership and secretariat for hosting a program for outgoing lawmakers.

She also expressed gratitude to all those she had worked with, including fellow lawmakers and stakeholders.