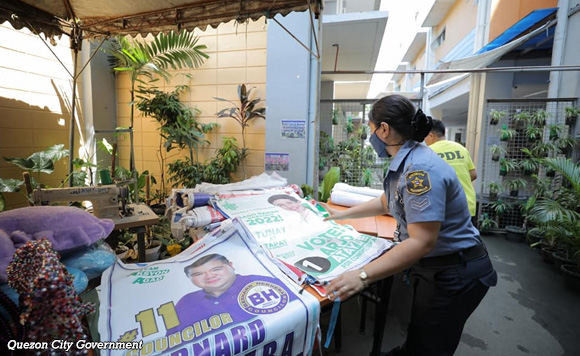 0 2,785
Share
Want more POLITIKO News? Get the latest newsfeed here. We publish dozens and dozens of politics-only news stories every hour. Click here to get to know more about your politiko - from trivial to crucial. it's our commitment to tell their stories. We follow your favorite POLITIKO like they are rockstars. If you are the politiko, always remember, your side is always our story. Read more. Find out more. Get the latest news here before it spreads on social media. Follow and bookmark this link. https://goo.gl/SvY8Kr

Many local governments have launched projects to turn election campaign materials into useful items, and in Quezon City persons deprived of liberty have joined the initiative.

The inmates of the QC Jail Female Dormitory are participating in the “Vote to Tote” project of the Quezon City government and Spark! Philippines.

It seeks to recycle candidates’ tarpaulins into other items such as bags, and is a livelihood project under the “No Women Left Behind” program, according to the Quezon City government.

It also aims to help the PDLs have a source of income.

Mayor Joy Belmonte thanked the city’s partners for the program.