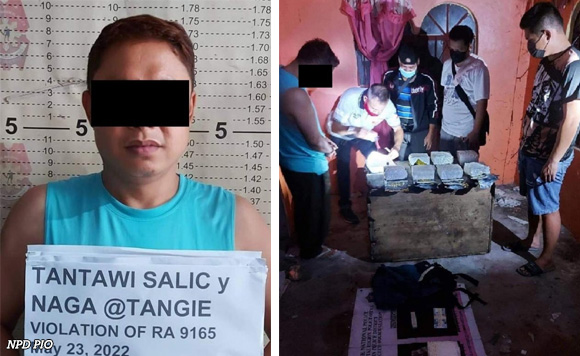 0 286
Share
Want more POLITIKO News? Get the latest newsfeed here. We publish dozens and dozens of politics-only news stories every hour. Click here to get to know more about your politiko - from trivial to crucial. it's our commitment to tell their stories. We follow your favorite POLITIKO like they are rockstars. If you are the politiko, always remember, your side is always our story. Read more. Find out more. Get the latest news here before it spreads on social media. Follow and bookmark this link. https://goo.gl/SvY8Kr

The Northern Police District has lauded the Caloocan City police for the arrest of one person and the seizure of P55M worth of suspected shabu during a buy-bust operation.

The suspect was identified as Tantawi Naga Salic, a 35 year old resident of Caloocan.

Salic was arrested during a buy bust operation conducted in the early morning of May 23 in Caloocan.

Found on him were eight big pieces of vacuum-sealed plastic bag with a white crystalline substance suspected to be shabu, which weighed 8,100 grams.

It was estimated to be worth P55.08 million, according to the Dangerous Drugs Board.

Also found on the suspect was a smaller bag with the same substance, foil wrapper bags, a digital weighing scale, and two pieces of marked P1000 bills as part of the boodle money.

Salic has been detained at the Caloocan Police Station Custodial Facility pending the filing of charges against him.

The seized drugs would be subject to analysis by the crime laboratory.