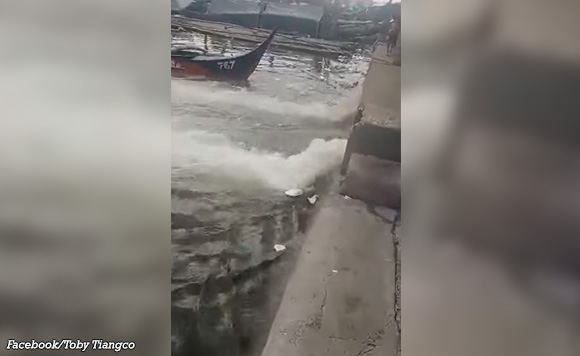 0 1,831
Share
Want more POLITIKO News? Get the latest newsfeed here. We publish dozens and dozens of politics-only news stories every hour. Click here to get to know more about your politiko - from trivial to crucial. it's our commitment to tell their stories. We follow your favorite POLITIKO like they are rockstars. If you are the politiko, always remember, your side is always our story. Read more. Find out more. Get the latest news here before it spreads on social media. Follow and bookmark this link. https://goo.gl/SvY8Kr

Navotas Mayor Toby Tiangco has received assurance from the Metropolitan Manila Development Authority that it would soon repair the defective pumping station navigational gate that has led to water inundating parts of the city.

Because the flood gate is broken and the high tide reaches up to two meters, water enters the city, said Tiangco.

In a letter to Tiangco, which the mayor shared on Facebook, the MMDA explained that it had searched for weeks for a private service provider that has the expertise to handle the underwater repair of the structure, which became defective in March.

The MMDA has since found the original contractor of the project and was in talks with it to expedite the repair of the gate.

The contractor had promised to start the underwater repair works this week.

This could be completed in two to three weeks, weather permitting, it said.

Tiangco said that in the meantime, the city’s pumping stations are in operation and the City Engineering Office has placed sand bags in areas where the water level on the street has risen.