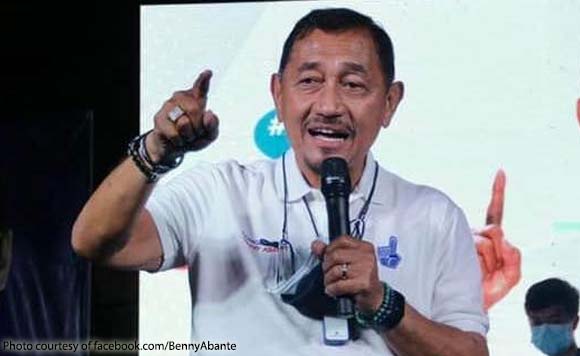 0 168
Share
Want more POLITIKO News? Get the latest newsfeed here. We publish dozens and dozens of politics-only news stories every hour. Click here to get to know more about your politiko - from trivial to crucial. it's our commitment to tell their stories. We follow your favorite POLITIKO like they are rockstars. If you are the politiko, always remember, your side is always our story. Read more. Find out more. Get the latest news here before it spreads on social media. Follow and bookmark this link. https://goo.gl/SvY8Kr

With Sangguniang Kabataan members set to enjoy more benefits under a new law, Deputy Speaker and Manila Rep. Benny Abante called on them to take on another responsibility, which is steering the youth away from gambling.

Abante said the additional benefits that the SK leaders would get under Republic Act 11768 are meant to help them focus more on their duties as leaders in their community.

These should include implementing programs to steer the youth away from vices like smoking and gambling, he said.

“Gambling, in particular, appears to be hooking more and more younger people. Before the President ordered a stop to e-sabong, we were getting disturbing news of teenagers regularly placing bets on online cockfighting,” he said.

The Mayor Clinic has warned that gambling during childhood or teenage years increases the risk of developing compulsive gambling, he noted, which is why the youth should be prevented from falling into this habit.

“More should be done to warn our youth about the dangers of vices such as gambling, which is slowly creeping into their lives via the devices they hold in their hands every day: their smartphones,” he said.

He warned that other forms of gambling, such as card games, could still be accessed online.

SK leaders could lead a campaign or information drive to warn parents and the youth about the dangers of these activities, he said.

The new law provides SK members with monthly honoraria in addition to other compensation under the law.

Previously, only the SK chair was compensated.