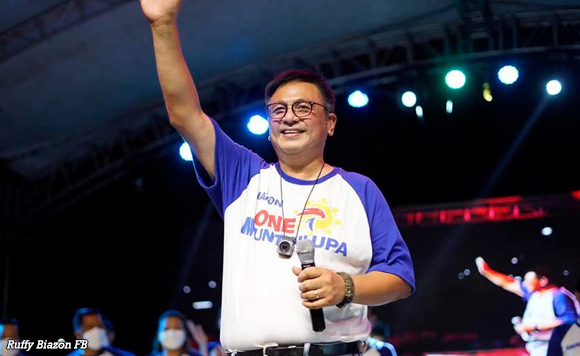 0 203
Share
Want more POLITIKO News? Get the latest newsfeed here. We publish dozens and dozens of politics-only news stories every hour. Click here to get to know more about your politiko - from trivial to crucial. it's our commitment to tell their stories. We follow your favorite POLITIKO like they are rockstars. If you are the politiko, always remember, your side is always our story. Read more. Find out more. Get the latest news here before it spreads on social media. Follow and bookmark this link. https://goo.gl/SvY8Kr

Muntinlupa Rep. Ruffy Biazon has thanked President Rodrigo Duterte for signing into law the measure that will finally close the revolving door system in the Armed Forces of the Philippines (AFP).

Biazon is referring to Republic Act 11709, which fixes the term of office of key officers of the AFP and increases the mandatory retirement age of generals and flag officers.

He said the revolving door system has long put the AFP “on constant short-term reset and making it prone to politicization due to the constant jostling for positions, especially at the higher ranks.

Biazon said the proposal has been pending for more than two decades, “although it could have been passed into law in the 16th Congress had it not been vetoed by President Noynoy Aquino.”

“I am thankful that after filing and refiling it since my first term since 2001, it has finally become a Republic Act,” Biazon added.

Biazon said the new law will be a “game-changer” for the AFP since it will enhance stability in the leadership, provide a focused effort in developing the armed forces and reduce the militics (military politics) resulting from the process of selecting leaders frequently.