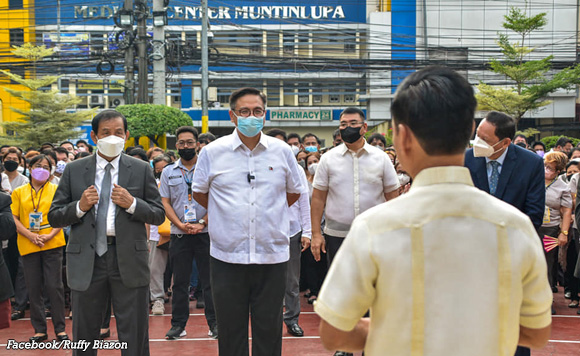 0 213
Share
Want more POLITIKO News? Get the latest newsfeed here. We publish dozens and dozens of politics-only news stories every hour. Click here to get to know more about your politiko - from trivial to crucial. it's our commitment to tell their stories. We follow your favorite POLITIKO like they are rockstars. If you are the politiko, always remember, your side is always our story. Read more. Find out more. Get the latest news here before it spreads on social media. Follow and bookmark this link. https://goo.gl/SvY8Kr

Muntinlupa Rep. Ruffy Biazon looks to be preparing for his role as the city’s next mayor by attending the Monday flag-ceremony at city hall.

Biazon addressed the local government personnel and conveyed his gratitude to all those who supported his bid.

He also acknowledged the new responsibilities that he would hold as local chief executive, which include ensuring Muntinlupa City’s growth and helping it to recover from the COVID-19 pandemic.

He asked for everybody’s cooperation for the improvement of Muntinlupa.

He also reminded them to continue to follow health protocols as the virus is still present.