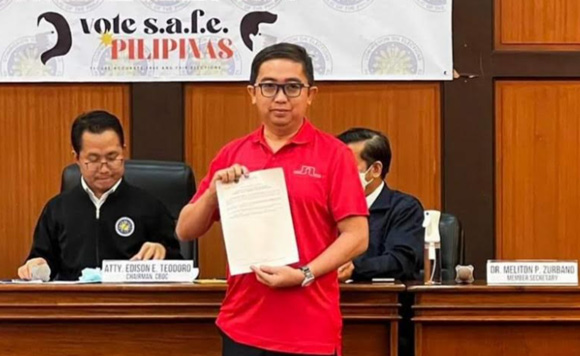 0 4,804
Share
Want more POLITIKO News? Get the latest newsfeed here. We publish dozens and dozens of politics-only news stories every hour. Click here to get to know more about your politiko - from trivial to crucial. it's our commitment to tell their stories. We follow your favorite POLITIKO like they are rockstars. If you are the politiko, always remember, your side is always our story. Read more. Find out more. Get the latest news here before it spreads on social media. Follow and bookmark this link. https://goo.gl/SvY8Kr

House Deputy Speaker Eric Martinez has won his reelection bid as representative of Valenzuela for his third and final term.

Martinez was proclaimed the winner by the City Board of Canvassers several hours after the voting was closed.

Based on the official tally, Martinez got an overwhelming 132,241 votes, while his lone opponent, former Rep. Magtanggol Gunigundo, has obtained 50,599 votes.

Martinez said his landslide victory is the “true testament” that his constituents appreciate his efforts in ensuring that his projects and programs are implemented well.

He also thanked President Rodrigo Duterte, the Iglesia Ni Cristo (INC), and the Marcos-Sara Duterte UniTeam for supporting him.

Martinez is part of the Gatchalian’s Team Red, a local political alliance.

Gatchalian’s younger brother Rep. Wes Gatchalian will be the next mayor of the city.