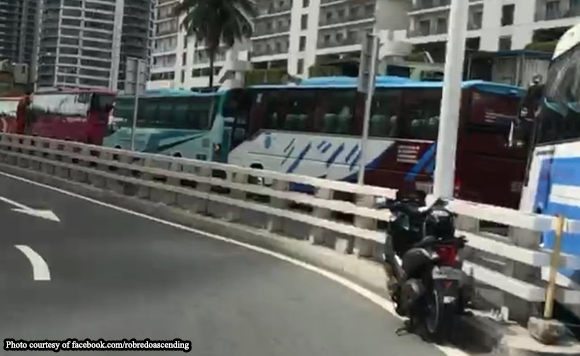 0 2,867
Share
Want more POLITIKO News? Get the latest newsfeed here. We publish dozens and dozens of politics-only news stories every hour. Click here to get to know more about your politiko - from trivial to crucial. it's our commitment to tell their stories. We follow your favorite POLITIKO like they are rockstars. If you are the politiko, always remember, your side is always our story. Read more. Find out more. Get the latest news here before it spreads on social media. Follow and bookmark this link. https://goo.gl/SvY8Kr

The Abalos clan washed their hands from supposed dirty tactics meant to give supporters of Vice President Leni Robredo a hard time to get to their miting de avance.

Reports on Saturday morning showed that several empty buses blocked the Pantaleon-Estrella Bridge where vehicles may pass from Mandaluyong heading to Makati, the site of the Kakampinks’ final rally on the last day of the campaign period.

Mayor Menchie Abalos, wife of presidential aspirant Bongbong Marcos’ campaign manager Benhur Abalos, said the buses were likely there to shuttle Marcos supporters to his own rally in Parañaque.

The politiko said the buses were there to ferry people and not exactly to block the road.