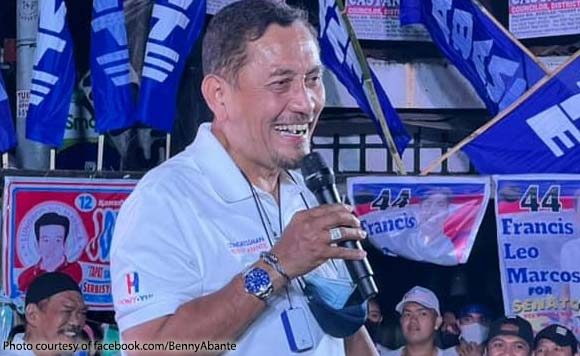 0 133
69
Want more POLITIKO News? Get the latest newsfeed here. We publish dozens and dozens of politics-only news stories every hour. Click here to get to know more about your politiko - from trivial to crucial. it's our commitment to tell their stories. We follow your favorite POLITIKO like they are rockstars. If you are the politiko, always remember, your side is always our story. Read more. Find out more. Get the latest news here before it spreads on social media. Follow and bookmark this link. https://goo.gl/SvY8Kr

President Duterte made the right decision when he ordered a stop to e-sabong or online cockfighting, according to Deputy Speaker and Manila Rep. Benny Abante.

Abante said the President’s decision would save Filipinos from the evils of gambling and put a stop to criminal activities linked to this activity.

“There is incontrovertible evidence that e-sabong, like other forms of gambling, is a vice that ruins lives and even endangers lives, as online cockfighting personnel have even gone missing under suspicious circumstances,” Abante said.

He earlier filed a House resolution calling on the Philippine Amusement and Gaming Corporation to stop e-sabong until measures are in place to guarantee the safety of personnel and participants in these games.

This came after more than 30 workers in e-sabong disappeared.

There are fears that they have been killed.

Abante said online gambling is a danger to minors and to vulnerable individuals as the platform makes it easy to lure them to the addictive activity.

“Dahil online ito, at napakadaling pumusta dito, maraming exposed dito na very susceptible to the addictive power of gambling, such as the young, the weak, the poor, and the uneducated,” he said.

Its ill effects are well-documented, he noted.

The country’s next President should address these issues and warn the public about the dangers of gambling, he said.

“Whoever becomes the next president should take a more proactive stance against gambling. In other countries, they may allow gambling, but they also have anti-gambling information campaigns––and I hope the next administration will build on this move by President Duterte and take steps to educate our citizens about the perils and pitfalls of gambling,” he said.