No fake crowds: Lacson thankful for supporters who keep showing up in town hall meetings 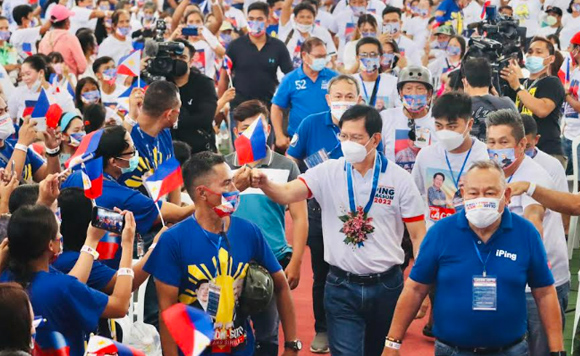 0 106
Share
Want more POLITIKO News? Get the latest newsfeed here. We publish dozens and dozens of politics-only news stories every hour. Click here to get to know more about your politiko - from trivial to crucial. it's our commitment to tell their stories. We follow your favorite POLITIKO like they are rockstars. If you are the politiko, always remember, your side is always our story. Read more. Find out more. Get the latest news here before it spreads on social media. Follow and bookmark this link. https://goo.gl/SvY8Kr

With about five days to go before Election Day, presidential candidate Panfilo ‘Ping’ Lacson is choosing to spend more time with the Filipino people, who keep showing up for his town hall meetings in the final stretch of the national campaign period.

Regardless of the size of the crowds, Lacson is bent on following his statesman instincts, opting to engage the public through interactive dialogues. This way, he could capitalize on the opportunity to explain his campaign platforms at length and how they can benefit a certain demographic.

In a tweet shared late Tuesday (May 3), Lacson thanked thousands of his legitimate supporters who came to see him, his running mate Senate President Vicente ‘Tito’ Sotto III and senatorial aspirant Emmanuel ‘Manny’ Piñol in Nasugbu, Batangas to discuss their thoughts about national issues.

[No fakery involved in the number of crowds who attended our town hall meeting with TitoSen in Nasugbu, Batangas earlier this afternoon. Thank you for your meaningful questions and discussions about the different issues of our nation.]

In the said forum, Lacson highlighted three of his main campaign platforms namely the Budget Reform Advocacy for Village Empowerment (BRAVE) program, internal cleansing of the national government to remove corruption, and the digitalization of all government transactions.

Team Lacson-Sotto also talked about their plans on the war on drugs, foreign policy, minimum wage, housing projects for homeless families, programs for senior citizens, job opportunities for the youth sector, as well as their economic policies, especially towards the recovery of the micro, small and medium-sized enterprises (MSME).

Lacson held similar activities for his scheduled visits to the cities of Bacolod, Bais and Dumaguete in the Negros Island Region on Wednesday (May 4). He noted that his preference for holding town hall meetings was driven by his desire to establish two-way communication with the Filipinos.

In a press conference with Manila-based journalists in Dumaguete City, Lacson said he is aware that “campaign is all about projection,” but he did not want his presidential bid to be all about that. He made it clear that he wanted voters’ education to serve as his campaign legacy.

“Campaign is all about projection. It doesn’t matter if you are projecting something good or something bad… [But] as much as possible we want to be truthful; we want to be honest,” according to the veteran statesman.

Regardless of where he stands on every pre-election survey that was published, Lacson intends to keep a positive outlook about his chances of winning his second presidential bid because of the ground campaign efforts exerted by his believers from the Lacson-Sotto Support Group.

“I don’t want to question the integrity of the survey firms. But then, I really cannot just believe na (that) I’m only worth two percent. In fact, maraming nagagalit sa mga ano namin e (a lot of our supporters are getting mad…) [They are saying] ‘We are not worth two percent. We are worth much more than that,” Lacson said.