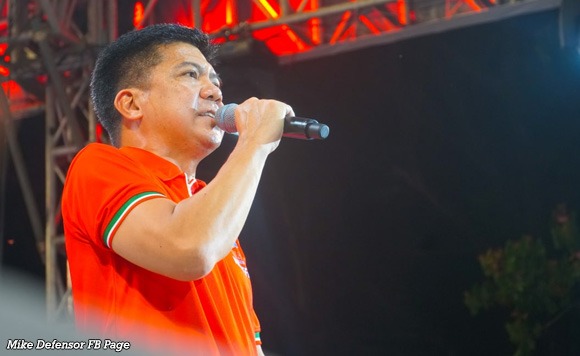 Quezon City mayoral candidate and Anakalusugan Rep. Mike Defensor on Wednesday criticized Mayor Joy Belmonte for closing a major road in the Batasan area for almost one day for her miting de avance in District 2.

“That’s a total of more than 21 hours, or almost one day, the period the mayor is asking motorists and commuters to bear some inconvenience and sacrifice for their rally in District 2,” Defensor said.

Defensor said the second congressional district “is the bailiwick of our allies – the Castelos – Rep. Precious Hipolito Castelo and her husband, my vice mayor, Councilor Winnie Castelo.”

“Why does Mayor Belmonte want to make our supporters there suffer?” he asked.

Defensor said UniTeam and Malayang Quezon City coalition, which he heads, held a proclamation rally in the same area last month, “but we were there for at most five hours only, not one day.”

That was an event attended by presidential frontrunner former Sen. Ferdinand Marcos Jr., whose vice presidential running mate, Davao City Mayor Sara Duterte, did not make it but gave a message through Sen. Bato dela Rosa, he said.

“This 21-hour road closure is just for a local campaign. That shows you the sense of entitlement of this group and their blatant disregard for public welfare,” he added.

Defensor recalled that in February, the city government effectively denied UniTeam the use of the sprawling Quezon City Memorial Circle for its opening campaign rally.

“QCMC is a public park, but they treat it as private property,” he added.