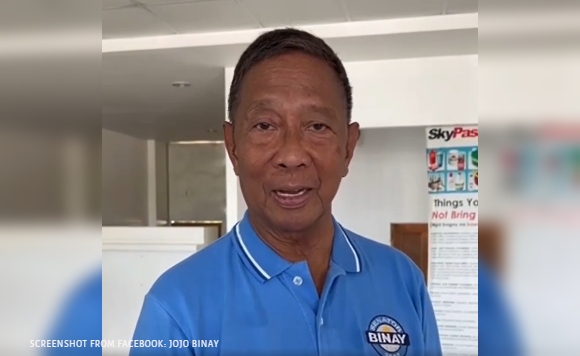 0 1,083
Share
Want more POLITIKO News? Get the latest newsfeed here. We publish dozens and dozens of politics-only news stories every hour. Click here to get to know more about your politiko - from trivial to crucial. it's our commitment to tell their stories. We follow your favorite POLITIKO like they are rockstars. If you are the politiko, always remember, your side is always our story. Read more. Find out more. Get the latest news here before it spreads on social media. Follow and bookmark this link. https://goo.gl/SvY8Kr

Senatorial candidate former Vice President Jejomar Binay is busy campaigning in the provinces ahead of the elections, contrary to rumors he is in poor health.

The latest health speculation prompted Binay to appear in a video on Facebook and Twitter to show he remains in good health while on the campaign trail. In the short clip, the senatorial aspirant said he is currently visiting Isabela, his mother’s hometown, and that the weather is good.

The video post was shared after MOCHA party list nominee Mocha Uson called on the Commission on Elections to look into the health condition of Binay ahead of the polls. The former Palace official claimed it would be “a grave injustice to the voters if he is elected but could not perform his functions because he is not physically or mentally able to do so.”

The camp of Binay has shrugged off Uson’s latest petition questioning the former Vice President’s health, saying it was “laughable, pathetic, and desperate.”

Tama na siraan! We can’t work together after elections if ‘malice’, ‘animosity’ prevail

Kate Coseteng has a tip for people with mental health woes