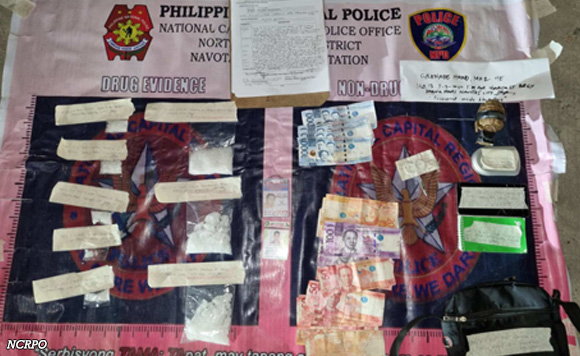 0 797
Share
Want more POLITIKO News? Get the latest newsfeed here. We publish dozens and dozens of politics-only news stories every hour. Click here to get to know more about your politiko - from trivial to crucial. it's our commitment to tell their stories. We follow your favorite POLITIKO like they are rockstars. If you are the politiko, always remember, your side is always our story. Read more. Find out more. Get the latest news here before it spreads on social media. Follow and bookmark this link. https://goo.gl/SvY8Kr

Navotas police have seized P1 million worth of suspected shabu and a hand grenade from two men who were nabbed during a buy bust operation, according to the National Capital Region Police Office.

The operation was conducted in the early hours of May 3 in Barangay Daanghari, Navotas.

During the buy bust, a poseur buyer was able to purchase a sachet of shabu from the suspects for P300.

Operatives swooped in after the transaction, and they were able to seize from the suspects three pieces of plastic bags with a white substance believed to be shabu,

The suspected shabu weighed around 160 grams and was estimated to be worth P1.088 million.

It will be subjected to examination at the Philippine National Police crime lab.

Police also found a hand grenade among the suspects’ items.

It was referred to the Explosive Ordnance Disposal unit.

The NCRPO said the suspects are under custody of the Northern Police District pending the filing of complaints against them.