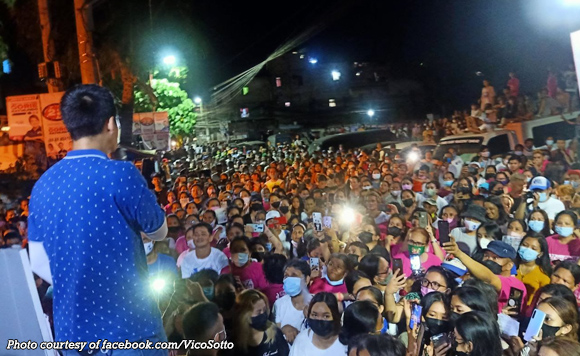 0 249
Share
Want more POLITIKO News? Get the latest newsfeed here. We publish dozens and dozens of politics-only news stories every hour. Click here to get to know more about your politiko - from trivial to crucial. it's our commitment to tell their stories. We follow your favorite POLITIKO like they are rockstars. If you are the politiko, always remember, your side is always our story. Read more. Find out more. Get the latest news here before it spreads on social media. Follow and bookmark this link. https://goo.gl/SvY8Kr

Pasig Mayor Vico Sotto said the brazen abuse of power in the city prompted him to run in 2019, and he is making sure that he’s not doing the same.

Sotto said he prioritizes the granting of permits for the rallies and motorcades of his rivals, which was something that was denied to him in 2019.

He recalled that when he was campaigning for mayor, he faced an uphill battle as one of his rallies was sabotaged with garbage and power blackouts.

Shortly before he visited Nagpayong in 2019, garbage and mud were dumped on the field, he said.

The power was also cut off when they arrived in the area.

But still the people stayed to listen to him and his running mate, he said.

Now that he is in power, he is changing the system, he said.

The people of Pasig are free to listen to all candidates and choose their leaders without intimidation, he said.