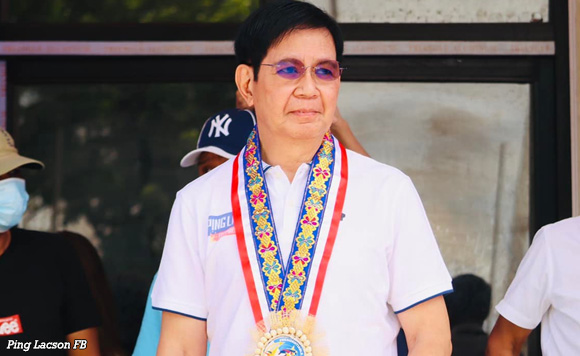 0 81
Share
Want more POLITIKO News? Get the latest newsfeed here. We publish dozens and dozens of politics-only news stories every hour. Click here to get to know more about your politiko - from trivial to crucial. it's our commitment to tell their stories. We follow your favorite POLITIKO like they are rockstars. If you are the politiko, always remember, your side is always our story. Read more. Find out more. Get the latest news here before it spreads on social media. Follow and bookmark this link. https://goo.gl/SvY8Kr

Presidential candidate Panfilo ‘Ping’ Lacson believes that the salary rates of workers must automatically increase congruent with the price adjustments of basic commodities, which often occur whenever the value of petroleum products goes up.

Lacson underscored this message during a town hall forum in Virac, Catanduanes, Friday (April 29), in response to the earnest appeal of a longtime security guard whose take-home pay stayed the same for almost five years now.

The veteran statesman said the Department of Labor and Employment (DOLE), through its Regional Tripartite Wages and Productivity Board, must already be looking into the wage hike petitions of various workers who deserve to earn enough money for a satisfactory standard of living.

[If the cost-of-living rises, we need to adjust the salary rate; otherwise, how can a family with three children, for example, survive? What should happen is to base it (wage hike) always (on the price of goods) and our DOLE must consistently monitor… It should not be neglecting (our workers).]

Insofar as the presidential aspirant is concerned, the daily minimum wage of an average Filipino worker this year must have already been adjusted to P652, or even P700, in Metro Manila alone based on their calculation. As things stand, however, it remains at P537 to 547 per day.

[It seems that the standard minimum wage has not been adjusted. It must always be adjusted in harmony with inflation. Now, crude oil prices are really expensive, the fuel. So, we really have to adjust.]

Meanwhile, when asked if he is in favor of making standard regional wages the same as the rates of those working in Metro Manila or in other urban areas, Lacson said salary adjustments would always be dependent on the prevailing economic conditions of communities.

[I don’t think we can implement a uniform rate because it is based on the cost-of-living of a particular area. There are places where the prices of commodities are cheap, and there are areas where they are expensive. That is where it (wage rate) should be based. But no area must be left behind.]

Last Thursday (April 28), Lacson also vowed to look into the possibility of adjusting the salaries of private nurses, but he needs all the relevant data at hand first before taking concrete steps toward that direction, if he is elected as the next president.

Lacson made the statement during his town hall forum in Malabon City. He was responding to a private nurse, who demanded government programs for people like him, as he is now seriously considering seeking better employment arrangements abroad.

According to Lacson, while the base pay of entry-level government nurses has recently been augmented to P32,000 up to P35,000 by virtue of a Supreme Court ruling, he is not aware if those who are employed in private hospitals kept up with it.

[I admit, I am not ready to answer your question on how we can increase the salary of a private nurse, but there must be a way. Because a lot of workers are resigning from private hospitals, some are applying to government hospitals, others are moving out of the country. We can’t keep it that way.]