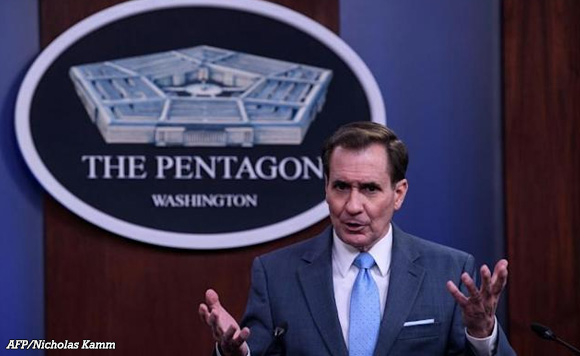 0 98
Share
Want more POLITIKO News? Get the latest newsfeed here. We publish dozens and dozens of politics-only news stories every hour. Click here to get to know more about your politiko - from trivial to crucial. it's our commitment to tell their stories. We follow your favorite POLITIKO like they are rockstars. If you are the politiko, always remember, your side is always our story. Read more. Find out more. Get the latest news here before it spreads on social media. Follow and bookmark this link. https://goo.gl/SvY8Kr

An emotional Pentagon spokesman lashed out Friday at Russian President Vladimir Putin’s “depravity” in Ukraine, questioning how any moral person could defend bombing hospitals and summary executions of innocent people.

John Kirby, the former US Navy admiral who has briefed journalists on camera five days a week since the war began on February 24, lost his composure momentarily as he spoke of atrocities committed in Ukraine.

“It’s hard to look at what he’s doing in Ukraine, what his forces are doing in Ukraine, and think that any ethical, moral individual could justify that,” Kirby said haltingly, when asked how the US government assessed the Russian leader’s mental state.

“I can’t talk to his psychology. But I think we can all speak to his depravity,” he said.

Kirby, spokesman for the State Department in 2015-2017 and for the Defense Department since early 2021, is known for his fluid, knowledgeable and fact-heavy answers to journalists, as well as for avoiding hyperbole and discipline to not say more than he is allowed to.

But he suddenly found himself at a loss for words Friday, looking grim and sad when reflecting on the two months of war.

He called Putin’s justifications for the invasion — that he is protecting Russians and that Ukraine was a font of Nazism — “BS.”

“It’s hard to square that rhetoric by what he’s actually doing inside Ukraine to innocent people, shot in the back of the head, hands tied behind their backs, pregnant women being killed, hospitals being bombed,” Kirby said.

“I mean, it’s just unconscionable and I don’t have the mental capacity to understand how you connect those two things.”

Before the war, Kirby said, “I don’t think we fully appreciated the degree to which (Putin) would visit that kind of violence and cruelty and depravity on innocent people, on non-combatants, on civilians, with such utter disregard for the lives he was taking,”

He then apologized for the rare show of emotion.

“I don’t want to make this about me. But I’ve been around the military a long, long time, and I’ve known friends who didn’t make it back. It’s just hard,” Kirby said. — Agence France-Presse