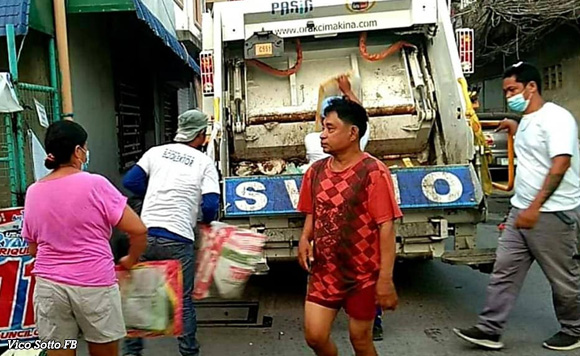 0 1,050
Share
Want more POLITIKO News? Get the latest newsfeed here. We publish dozens and dozens of politics-only news stories every hour. Click here to get to know more about your politiko - from trivial to crucial. it's our commitment to tell their stories. We follow your favorite POLITIKO like they are rockstars. If you are the politiko, always remember, your side is always our story. Read more. Find out more. Get the latest news here before it spreads on social media. Follow and bookmark this link. https://goo.gl/SvY8Kr

Pasig City’s new garbage collection program led by the local government has been going well so far, according to Mayor Vico Sotto.

Sotto said the first three days of the Garbage Collection by Admin program, which is being pilot tested in Barangay Pinagbuhatan, generated good feedback.

The city has been able to enter many areas that contractors did not reach before, he said.

He also listed the benefits of having the local government in charge of garbage collection.

One is that it would end the recurring problem of contractors facing difficulties every December.

Another is that the local government could discipline the garbage collectors since they are now considered LGU staff.

There would also be no more risk of changing contractors and having adjustment periods every year, he said.

The city government would save money as well, and the system would lessen the risk of corruption even for future administrations, he said.

“Bonus- the LGU will spend less and it will be more difficult for future mayors to make corrupt deals,” he said.

Pasig City has 8 garbage trucks and more than 30 staff in the field who go around Barangay Pinagbuhatan, he said.

The local government would later study if the system could be expanded to other parts of the city.