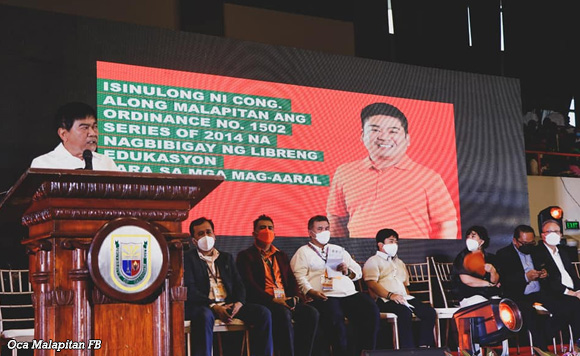 0 740
Share
Want more POLITIKO News? Get the latest newsfeed here. We publish dozens and dozens of politics-only news stories every hour. Click here to get to know more about your politiko - from trivial to crucial. it's our commitment to tell their stories. We follow your favorite POLITIKO like they are rockstars. If you are the politiko, always remember, your side is always our story. Read more. Find out more. Get the latest news here before it spreads on social media. Follow and bookmark this link. https://goo.gl/SvY8Kr

Caloocan Mayor Oca Malapitan said his efforts to push for a College of Law in the University of Caloocan City were worth it after it produced its first batch of lawyers.

Malapitan held a ceremony to fete the five new lawyers from UCC who came from its first batch of law graduates.

The mayor, who also chairs the UCC Board of Regents, thanked the Caloocan taxpayers for allowing the implementation of projects for the university.

These include the construction of four campuses and new facilities, the increase in the salary of teachers, and the free tuition to university scholars.