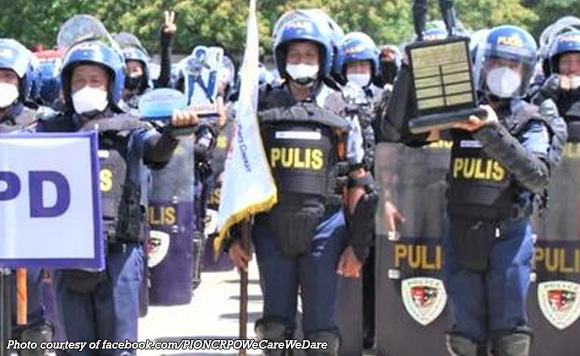 0 769
9
Want more POLITIKO News? Get the latest newsfeed here. We publish dozens and dozens of politics-only news stories every hour. Click here to get to know more about your politiko - from trivial to crucial. it's our commitment to tell their stories. We follow your favorite POLITIKO like they are rockstars. If you are the politiko, always remember, your side is always our story. Read more. Find out more. Get the latest news here before it spreads on social media. Follow and bookmark this link. https://goo.gl/SvY8Kr

It looks like the Eastern Police District in Metro Manila is the best when it comes to handling civil disturbances in the capital region.

The EPD bagged the championship during the Civil Disturbance Management Competition held on April 26 at the Camp Bagong Diwa in Taguig, according to the National Capital Region Police Office.

Metro Manila’s five police districts joined the event, which is intended to improve police personnel’s competence in handling stressful situations and to enhance their ability to practice maximum tolerance during any civil unrest.

The competition had three stages: a graded inspection, a basic formation demonstration, and the handling of problem-based scenarios.

The EPD was the overall champion, while the Manila Police District was the second placer.

The Southern Police District was in third place.

Winners were also recognized during the different stages of the competition.

The Manila Police District was the first placer during the simulation of a rally.

“With all your vigor and strength, I believe that you are all set and ready to protect the general public and to ensure their safety and security. Together, let us ensure to convert these efforts and tiresome preparations into a success. Magserbisyo ng maayos at tama at isapuso ang disiplina,” he said.