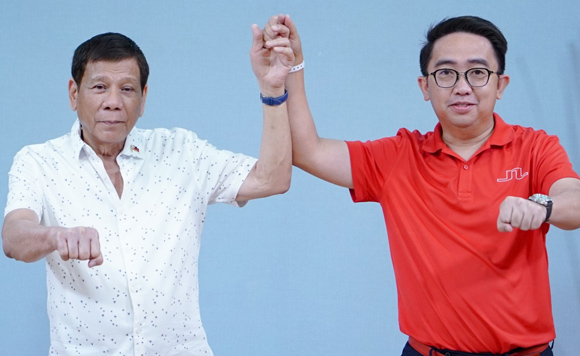 0 703
Share
Want more POLITIKO News? Get the latest newsfeed here. We publish dozens and dozens of politics-only news stories every hour. Click here to get to know more about your politiko - from trivial to crucial. it's our commitment to tell their stories. We follow your favorite POLITIKO like they are rockstars. If you are the politiko, always remember, your side is always our story. Read more. Find out more. Get the latest news here before it spreads on social media. Follow and bookmark this link. https://goo.gl/SvY8Kr

During a simple ceremony, Duterte raised the hand of Martinez, who is running for his third term as Representative of the second district of Valenzuela.

Martinez said the President’s 60% approval rating two months before his term ends shows that his support will give a great impact on anybody’s candidacy.

“It’s the President Duterte himself who is announcing to the people that he is endorsing my candidacy. It means a lot, what more can I ask for,” said Martinez who will be up against former Rep. Magtanggol Gunigundo.

Martinez is the remaining and original incumbent public official in Metro Manila to push and actively campaign for the presidential bid of then Davao City Mayor Duterte in 2016.

Martinez has posted an 84% acceptance rating in an independent survey conducted last January 2022 while Gunigundo only has 16%.