Game fixing? Willie Ong bares offer to back out of the VP race in exchange for DOH post 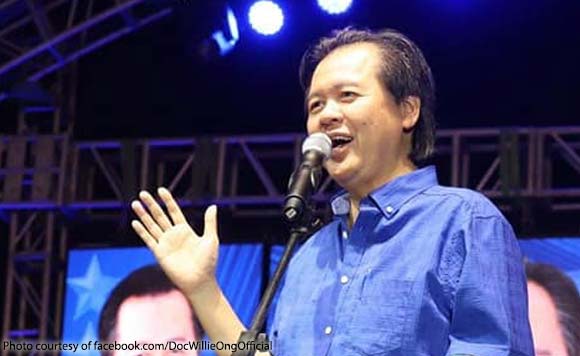 0 161
Share
Want more POLITIKO News? Get the latest newsfeed here. We publish dozens and dozens of politics-only news stories every hour. Click here to get to know more about your politiko - from trivial to crucial. it's our commitment to tell their stories. We follow your favorite POLITIKO like they are rockstars. If you are the politiko, always remember, your side is always our story. Read more. Find out more. Get the latest news here before it spreads on social media. Follow and bookmark this link. https://goo.gl/SvY8Kr

Vice presidential candidate Willie Ong on Saturday revealed that he had received an offer to drop out of the race in exchange for a plum position in the next administration.

But Ong assured his supporters that he would see the race through to the end.

In a video on Facebook, Ong narrated that somebody visited him at his home last December to ask him to withdraw and to declare his support for another candidate.

The person asked Ong to urge his supporters to choose this other candidate instead and promised him rewards.

Ong said he would not name this person or the candidate as he does not want to defame other people.

He also said he was not sure if the person had the blessing of the candidate, and said he would rather not speculate.

He was just divulging this so that people would know what is happening behind the scenes.

After receiving the offer, Ong said he went campaigning in Cagayan de Oro and Butuan to underscore the fact that he continue with his vice presidential bid.

He is serious about his candidacy, he said.