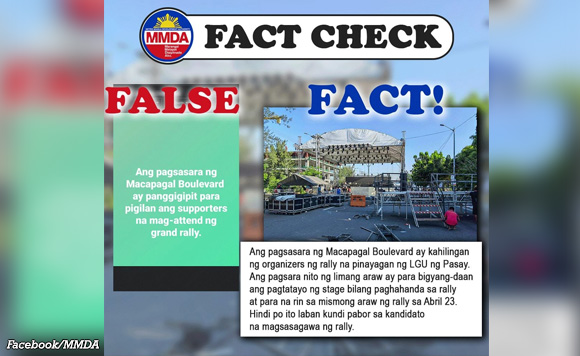 0 133
Share
Want more POLITIKO News? Get the latest newsfeed here. We publish dozens and dozens of politics-only news stories every hour. Click here to get to know more about your politiko - from trivial to crucial. it's our commitment to tell their stories. We follow your favorite POLITIKO like they are rockstars. If you are the politiko, always remember, your side is always our story. Read more. Find out more. Get the latest news here before it spreads on social media. Follow and bookmark this link. https://goo.gl/SvY8Kr

The Metro Manila Development Authority on Friday said the closure of Macapagal Boulevard from April 19 to 24 was not made to make things difficult for the supporters of Vice President Leni Robredo, who is set to hold a grand rally there on Saturday.

The MMDA also clarified that the rally organizers themselves sought the road closure, which was approved by the Pasay City government.

It issued the statement to debunk allegations that the road closure was intended to sabotage Robredo.

It said the early road closure was not in line with MMDA policy, but it did not object to avoid accusations of bias.

It said portions of the road were closed to make way for the construction of the stage to be used for the grand rally.

The road would also be closed during the rally because of the expected crowd, and would remain closed the following day for the dismantling of the stage, it said.

It also said the traffic plan for the area was crafted by the organizers and the Pasay City government.