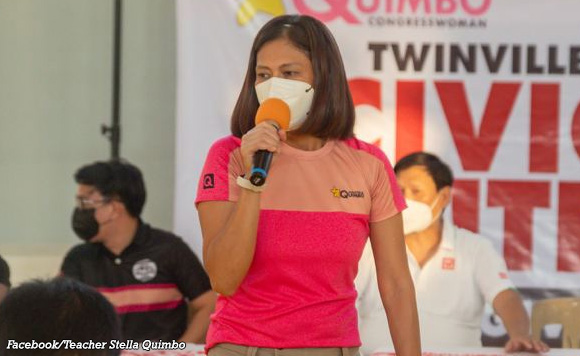 0 644
Share
Want more POLITIKO News? Get the latest newsfeed here. We publish dozens and dozens of politics-only news stories every hour. Click here to get to know more about your politiko - from trivial to crucial. it's our commitment to tell their stories. We follow your favorite POLITIKO like they are rockstars. If you are the politiko, always remember, your side is always our story. Read more. Find out more. Get the latest news here before it spreads on social media. Follow and bookmark this link. https://goo.gl/SvY8Kr

With three weeks left before the May 9 voting, incumbent Marikina Congresswoman Stella Alabastro-Quimbo remains the top choice for Congress as representative of the second district of Marikina by a wide margin over her opponents, according to a latest survey by the Philippine Survey and Research Center (PSRC)

In an opinion poll conducted by PSRC from March 25 to April 4, 2022, Quimbo kept her commanding lead across all seven barangays and demographic groups, as a total of 81% of respondents said they would vote for her if elections were held at the time the survey was conducted.

Since the start of the campaign for local elective posts last month, Quimbo, who is known as Teacher Stella in her district, was the heavy favorite compared to congressional seat contenders Del De Guzman (11%) and Mauro Arce (4%).

Results of the survey logged a 4% undecided respondents and zero abstention.

The latest opinion poll is consistent with the survey conducted by the Philippine Survey and Research Center (PSRC) in the past, which indicated that Quimbo was the number one pick of poll respondents from Barangays Concepcion Uno, Tumana, Nangka, Parang, Fortune, Marikina Heights, and Concepcion Dos.

Since she was elected in 2019, Quimbo has put forward more than 300 bills, including the Accelerated Recovery and Investment Stimulus for the Economy (ARISE) and the Bayanihan to Recover as One Act, or Bayanihan 2—measures that earned her the monicker “Ayuda Queen.”