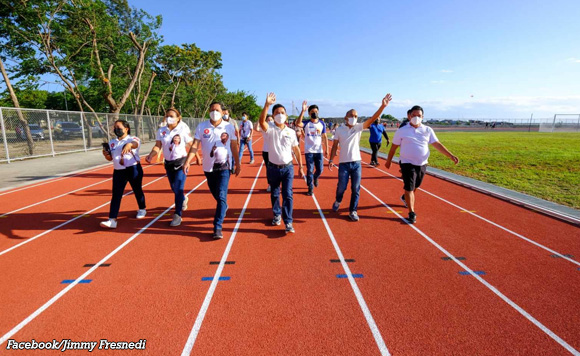 0 141
Share
Want more POLITIKO News? Get the latest newsfeed here. We publish dozens and dozens of politics-only news stories every hour. Click here to get to know more about your politiko - from trivial to crucial. it's our commitment to tell their stories. We follow your favorite POLITIKO like they are rockstars. If you are the politiko, always remember, your side is always our story. Read more. Find out more. Get the latest news here before it spreads on social media. Follow and bookmark this link. https://goo.gl/SvY8Kr

Muntinlupa Mayor Jaime Fresnedi feels proud of having a world-class track and field facility in his city.

The 8-lane, 400-meter oval was recently inaugurated, and the event was attended by the Philippines’ long jump queen and heptathlon champion Elma Muros-Posadas.

It has a provision for bleachers as well, he added.

He said that before the facility was completed, Muntinlupa athletes had to travel to Marikina, Biñan, or Rizal for their training.

Fresnedi also said the construction of the facility is an investment in the youth.

But people of all ages could enjoy it for exercise and other activities, he said.

His only request is that they take care of the place so that future generations could enjoy it as well.