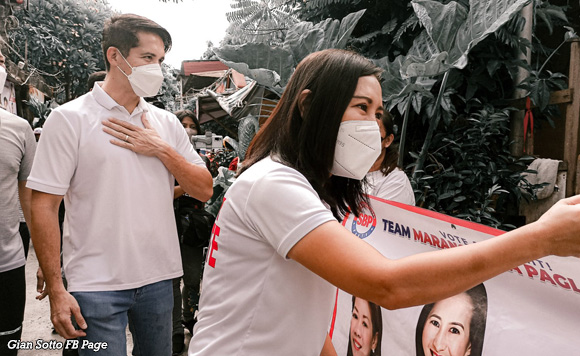 Both running for reelection, Quezon City Mayor Joy Belmonte and Vice Mayor Gian Sotto enjoy a big lead over their rivals with three weeks to go before the polls.

The latest non-commissioned survey of Publicus Asia, conducted between April 8 to 13, showed Belmonte with 48 percent.

Another 15 percent were undecided, while 2 percent would vote for none of the candidates.

Glenda Araneta, Ric Bello, and Diosdado Velasco each got 2 percent, while Jose Ingles, Rolando Jota, and Tom Salutan each got 1 percent.

In the vice mayoralty race, Sotto got 46 percent while his closest rival Winnie Castelo got 24 percent.

Helen Rodriguez got 6 percent, Christine Laraño got 3 percent, while 2 percent would not vote for any of the candidates.