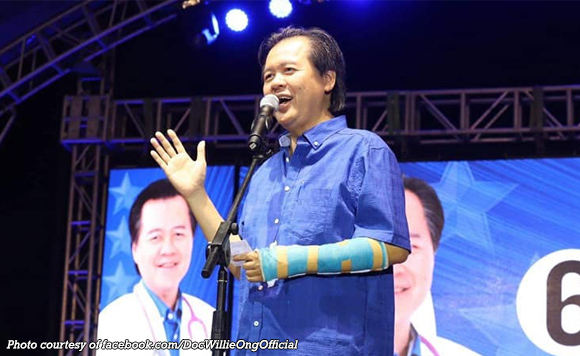 0 556
Share
Want more POLITIKO News? Get the latest newsfeed here. We publish dozens and dozens of politics-only news stories every hour. Click here to get to know more about your politiko - from trivial to crucial. it's our commitment to tell their stories. We follow your favorite POLITIKO like they are rockstars. If you are the politiko, always remember, your side is always our story. Read more. Find out more. Get the latest news here before it spreads on social media. Follow and bookmark this link. https://goo.gl/SvY8Kr

Manila Mayor Isko Moreno Domagoso can’t expect support from his running mate Willie Ong in his bid to get Leni Robredo to withdraw from the presidential race.

Ong said he is not in favor of asking Robredo to back out.

In a vlog he shared on Facebook on Tuesday, Ong said the media asked for his opinion on the issue and his position is Robredo, or any candidate for that matter, should not withdraw.

He said he thinks Robredo is smart and competent, and noted that during the Jessica Soho interview, her answers to the issues were 100 percent similar to his own.

But he offered an explanation for Domagoso’s challenge for Robredo, saying it was his running mate’s response to earlier calls asking the Manila Mayor to back down.

He has also received his share of calls urging him to withdraw from the vice presidential race, but he has chosen to stay silent about these, he said.

Ong, who said he has no problem with any of the presidential candidates, said those who are bickering should sit down and talk with each other.

He is willing to volunteer as broker to put an end to the issues, he said.