Thanks for 11 years! Perlas-Bernabe pays tribute to SC colleagues before retirement 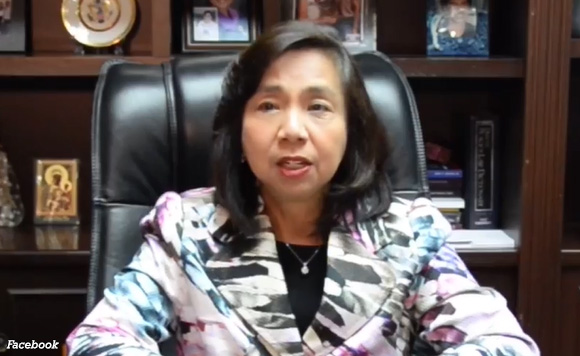 0 94
Share
Want more POLITIKO News? Get the latest newsfeed here. We publish dozens and dozens of politics-only news stories every hour. Click here to get to know more about your politiko - from trivial to crucial. it's our commitment to tell their stories. We follow your favorite POLITIKO like they are rockstars. If you are the politiko, always remember, your side is always our story. Read more. Find out more. Get the latest news here before it spreads on social media. Follow and bookmark this link. https://goo.gl/SvY8Kr

Supreme Court (SC) Justice Estela Perlas-Bernabe on Monday (April 18) expressed thanks to tribunal as she is set to retire next month.

“So, thank you for eleven years of gracious hospitality and warm camaraderie,” she added.

Though is set to retire, Bernabe said she prefers saying thank you than farewell.

“I don’t want to say farewell kasi di ba, pag farewell parang malungkot? So instead, I just want to say, ‘thank you and see you again,’” the magistrate explained.

“Now hopefully I can still get to visit you and see you as a guest of the Court,” she added.

Bernabe, who will compulsorily retire on her 70th birthday this May 14, was appointed SC magistrate in 2011 by then President Benigno “Noynoy” Aquino III.

Prior her appointment at the tribunal, she served as Court of Appeals (CA) justice from 2004 to 2011.

She also served as a judge of the Metropolitan Trial Court (MTC) and Regional Trial Court (RTC) of Makati City.

Bernabe, who is native of Plaridel, Bulacan, graduated with a degree in commerce from St. Paul College Manila and earned her law degree from the Ateneo College of Law.