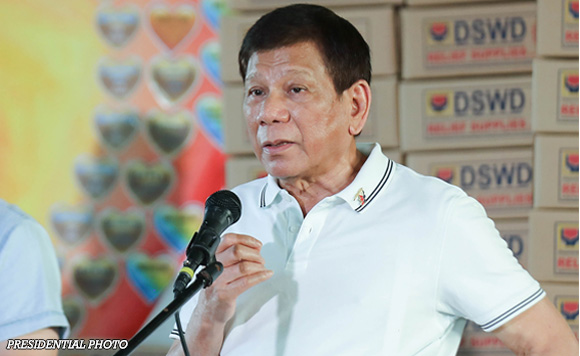 0 163
Share
Want more POLITIKO News? Get the latest newsfeed here. We publish dozens and dozens of politics-only news stories every hour. Click here to get to know more about your politiko - from trivial to crucial. it's our commitment to tell their stories. We follow your favorite POLITIKO like they are rockstars. If you are the politiko, always remember, your side is always our story. Read more. Find out more. Get the latest news here before it spreads on social media. Follow and bookmark this link. https://goo.gl/SvY8Kr

President Rodrigo Duterte has instructed mayors and other officials to provide the immediate needs of the typhoon victims.

“This is what I really came for, I just want to make you smile. I know what you’re going through, especially those who are wounded. It pains me, too. While I was conducting an aerial inspection earlier, Jalad told me that there’s a lot more,” the Chief Executive said in his speech.

“That’s why I can’t speak properly. It is up to your mayors and officials to see to it that the needs of everybody suffering right now is addressed, as well as the problems that are yet to be identified,” he added.

In Leyte, Duterte also handed out relief goods to the survivors and promised to continue providing food and shelter to all those affected.