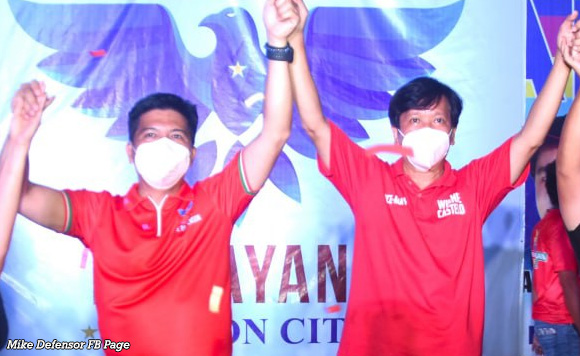 0 989
Share
Want more POLITIKO News? Get the latest newsfeed here. We publish dozens and dozens of politics-only news stories every hour. Click here to get to know more about your politiko - from trivial to crucial. it's our commitment to tell their stories. We follow your favorite POLITIKO like they are rockstars. If you are the politiko, always remember, your side is always our story. Read more. Find out more. Get the latest news here before it spreads on social media. Follow and bookmark this link. https://goo.gl/SvY8Kr

Defensor and Castelo said at least 120,000 of their supporters are expected to attend the proclamation rally to be held along Batasan Road in Barangay Batasan Hills between 6 to 9 p.m.

Last Sunday, vice presidential candidate Sara Duterte has joined Defensor and Castelo in visiting a number of barangay and their supporters in the city.

In February, Duterte and several senatorial candidates of the UniTeam also went around Quezon City to campaign accompanied by Malayang QC candidates.

Based on the tracking survey for March of pollster Issues and Advocacy Center, Defensor, Castelo, and their congressional candidates were enjoying wide leads over their opponents.

Defensor and Castelo have thanked their supporters and promised them a transparent, honest, proactive, and responsive city government if elected.