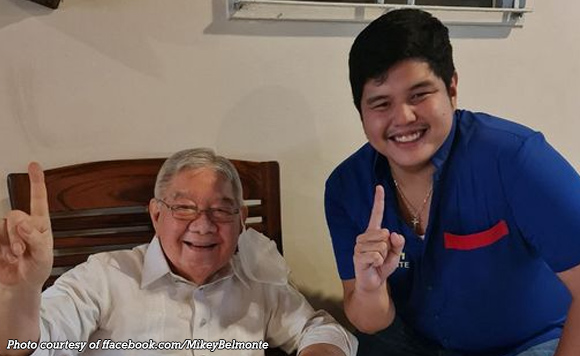 0 1,163
Share
Want more POLITIKO News? Get the latest newsfeed here. We publish dozens and dozens of politics-only news stories every hour. Click here to get to know more about your politiko - from trivial to crucial. it's our commitment to tell their stories. We follow your favorite POLITIKO like they are rockstars. If you are the politiko, always remember, your side is always our story. Read more. Find out more. Get the latest news here before it spreads on social media. Follow and bookmark this link. https://goo.gl/SvY8Kr

This is because his grandfather is none other than former House Speaker and former Quezon City Mayor Sonny Belmonte.

Mikey said young politikos like him would benefit from lessons from their elders, and he is fortunate to be SB’s grandchild.

Even if his grandfather is 85 years old, he remains sharp and and strong, he said.

He thanked him for teaching him a lot and for supporting him on his political journey.